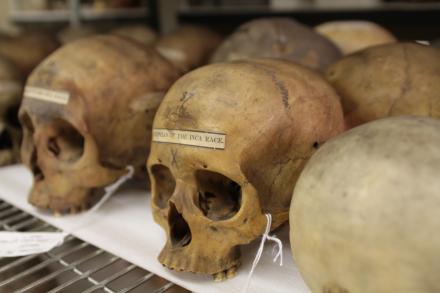 Science and Race at Penn Museum

The Penn Museum (University of Pennsylvania Museum of Archaeology and Anthropology) is home to one of the most famous collections of human skulls in the world. The Samuel Morton Collection of Human Crania is a valuable asset for scientists, anthropologists, and historians, as well as a relic of a deeply problematic period in the history in which it was used to justify scientific racism. Now the Penn Museum is using this collection and its fraught history as a starting point for conversations on race, science, and justice.

Samuel Morton (1799–1851) was the Philadelphia-based scientist who amassed the collection of over one thousand skulls that now bears his name. Morton measured the skulls and classified them by race; his research posited that measurements and features in each race’s skull corresponded to intelligence and personality. Proponents of slavery used Morton’s findings to justify their own belief in separate and unequal races, and he is now known as the father of scientific racism. The collection came to the Penn Museum in the 1960s.

The Penn Museum developed The Public Classroom: Science and Race: History, Use, and Abuse to examine the legacy of the Morton Collection in a way that is sensitive and empathetic to participants, while also furthering real and challenging conversations about race in the United States. Five free public classes will take place this fall, beginning September 21; the topics will examine race as a social construct, biomedicine and race, geography and race, genetics and race, and violence and race. Each course will feature expert panelists and moderators from a variety of fields, and will build on the previous session’s material. The courses will be available to live-stream and view online later for those who cannot attend on-site at the museum. Students in the University of Pennsylvania’s CAMRA "multi-modal initiative" will also create a documentary to accompany the program that will be available in 2017.

Learn more about Public Classroom: Science and Race  and how to participate on the program website.

Home Page Title:
Science and Race: History, Use, and Abuse at Penn Museum