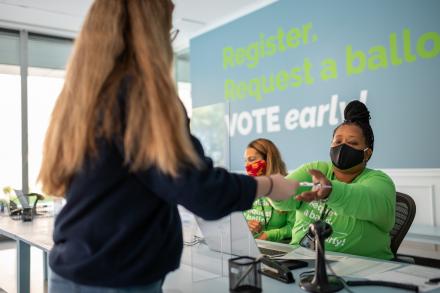 The Institute for Museum and Library Services has created a hub on their website for museums and libraries seeking ways to promote civic engagement, highlighting several initiatives from AAMD member museums.

The IMLS Civic Engagement website is a direct response to a White House statement calling upon the agency to “create and distribute a toolkit of resources and strategies that libraries, museums, and heritage and cultural institutions can use to promote civic engagement and participation in the voting process.” This statement was itself was a response to President Biden’s Executive Order 14019, Promoting Access to Voting, recognizing that the right to vote is the foundation of American democracy and the responsibility of the Federal Government to expand access to, and education about, voter registration and election information, and to combat misinformation, in order to enable all eligible Americans to participate in our democracy. The site highlights examples of how museums and libraries are promoting civic engagement with IMLS funding and on their own.

Pictured above: The University of Michigan Museum of Art transformed its Stenn Gallery into a satellite Ann Arbor City Clerk’s office, making the work of administering the election and managing voter rolls and absentee ballots a publicly visible, transparent undertaking, which allowed on-site voter registration, absentee ballot requests, and early voting. Over the course of the project, 5,412 new voters were registered and 8,500 votes were cast at the museum.  Photo by Dominick Sokotoff