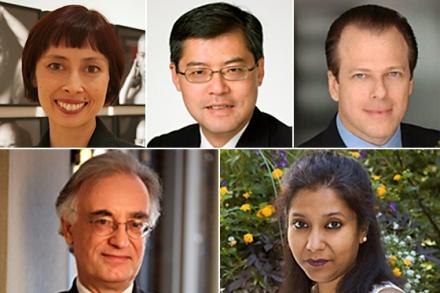 A video of highlights from this event are available here.

A collection of live-tweets from the event are available here.

Maxwell L. Anderson (Moderator) is the Eugene McDermott Director of the Dallas Museum of Art. After graduating from Dartmouth College and receiving a Ph.D. in art history from Harvard University in 1981, he worked as curator at The Metropolitan Museum of Art for six years. Since 1987 he has directed a total of five museums, including the Whitney Museum of American Art and the Indianapolis Museum of Art.  He has served on the faculties of Princeton University and the University of Rome, and is the author of dozens of publications, including Pompeian Frescoes in the Metropolitan Museum of Art and The Quality Instinct: Seeing Art Through a Museum Director's Eye. He has been decorated by the Italian Republic as Commendatore dell'Ordine al Merito della Repubblica Italiana and by the French Republic as a Chevalier dans l’Ordre des Arts et des Lettres.

Dr. Melissa Chiu is Museum Director and Senior Vice President, Global Arts and Cultural Programs, Asia Society in New York responsible for overseeing the programming for the museum in New York, and buildings in Houston and Hong Kong. She was previously Founding Director of the Asia-Australia Arts Centre in Sydney (1996-2001). As a leading authority on Asian contemporary art, she has organized nearly 30 exhibitions of artists from across Asia including a retrospective by Zhang Huan, a survey of Yoshitomo Nara, and an exhibition of art from China’s Cultural Revolution. Chiu earned a M.A. in arts administration (1994) and a PhD (2005) in art history and is the author of numerous articles and books including Breakout: Chinese Art Outside China (2007), Chinese Contemporary Art: 7 Things You Should Know (2008), Asian Art Now (Monacelli Press, 2010, co-authored with Benjamin Genocchio) and an anthology Contemporary Art in Asia: A Critical Reader (MIT Press, 2011, co-edited with Benjamin Genocchio).

Currently, Dr. Ghose is leading the Vivekananda Memorial Program for Museum Excellence, a four-year project funded by a grant from the Government of India that is designed to foster professional exchanges between the Art Institute and various museums in India. She is also developing a major international loan exhibition on the arts of Jaipur and preparing for the installation of Zarina: Paper Like Skin, a retrospective of the Indian born artist Zarina Hashmi, which is traveling to the Art Institute later this summer.

After completing her doctoral dissertation at the University of London, Madhuvanti was a research fellow at the Department of Eastern Art, Ashmolean Museum, Oxford University. She was previously lecturer in South Asian Art and Archaeology at the School of Oriental and African Studies (SOAS), University of London, UK.

Julian Raby was appointed director of the Freer Gallery of Art and Arthur M. Sackler Gallery in March 2002. Together, the Freer and Sackler galleries form the National Museum of Asian Art at the Smithsonian Institution in Washington, D.C. Raby, 62, was born in London. He received his bachelor’s degree with honors from Magdalen College at the University of Oxford in 1971 and his doctorate in Oriental Studies from the University of Oxford in 1981.  His affiliation with Oxford grew to include a prominent role as University Lecturer in Islamic Art and Architecture (1979 to 2006), Chairman of Curators of the Oriental Institute (1991-1993; 1995-2000), and Chairman of the Board of the Faculty of Oriental Studies (1993-1995). While Chairman of Curators, Raby was closely involved in the creation of the Oxford University Teaching and Research Unit of Hebrew and Jewish Studies.

Raby also has extensive experience in the field of publishing, where he has distinguished himself in the area of Asian studies as author, editor and publisher.  Julian Raby served as the Monographs Editor for the British Institute of Archaeology and History in Amman, Jordan (1991-1993). Raby is the founder and former co-owner of Azimuth Editions, a major publisher in the field of Asian studies.

In addition, Raby has served as curator, concept designer and consultant for numerous museum exhibitions in both the United States and abroad. Exhibitions include the landmark Iznik, The Pottery of Ottoman Turkey, Turkish & Islamic Arts Museum in Istanbul (1989); Empire of the Sultans: Ottoman Art from the Khalili Collection (1995); Royal Persian Painting: The Qajar Epoch, at the Brunei Gallery School of Oriental and African Studies at the University of London (1999); and Portraits of the Sultan: Picturing the House of Osman, at the Topkapi Palace Museum in Istanbul (2000).

An active participant in professional and educational associations, Raby has served as a member of the Council of the British Institute of Archaeology and History in Amman, Jordan, and is a fellow of the Society of Antiquaries. He is a Socio Straniero of the Accademia Veneta, and a fellow of the Academia Europea.

Dr. Jay Xu has been Director of the Asian Art Museum of San Francisco since June 2008. From 2003 to 2008, he worked at the Art Institute of Chicago as Pritzker Curator of Asian Art and then Pritzker Chairman of the Department of Asian and Ancient Art in charge of arts of Asia and of the ancient Mediterranean world. From 1996 to 2003, he worked at the Seattle Art Museum as Foster Foundation Curator of Chinese Art and then Head of the Department of Asian Art. In 1995 and 1996, Dr. Xu was a research fellow in the Department of Asian Art, The Metropolitan Museum of Art, New York. He began his museum career at the Shanghai Museum (1983-1990) and received his graduate training in early Chinese art and archaeology at Princeton University (MA and PhD).

Dr. Xu is committed to deepening understanding of Asian art and culture in the global context, and to advocating global art as an essential platform for cross-cultural understanding and diplomacy. His vision for the Asian Art Museum is to embrace and explore interconnectivity between artistic ideas in Asia and in the rest of the world, and between traditional and contemporary art.

Dr. Xu serves on the Advisory Board of the Asia Society Northern California, and is a member of the Committee of 100—a national non-partisan organization composed of American citizens of Chinese descent who have achieved positions of leadership in the United States in a broad range of professions.

Sponsored by the Asia Society, the Association of Art Museum Directors, and the American Federation of Arts.

Admission is free, but registration is required as seats are limited. See program description for registration.