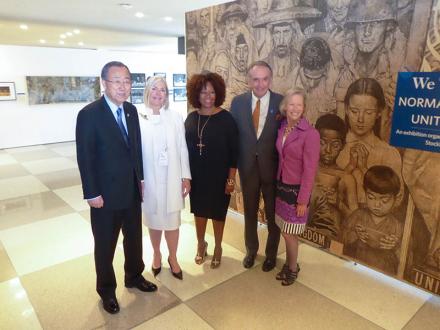 Norman Rockwell at the United Nations

In his painting Golden Rule, Norman Rockwell “expressed what I believe to be his core belief that guided his art…that we are one people sharing one world in common humanity,”  says Norman Rockwell Museum director Laurie Norton Moffatt. A large mosaic version of Golden Rule is installed at the United Nations, where “at virtually any hour – you will find tourists, delegates and diplomats marveling before it,” according to UN Secretary-General Ban Ki-moon. Now, Rockwell’s rarely exhibited drawing United Nations, a precursor to Golden Rule, is also on view at the UN in an exhibition organized by the Norman Rockwell Museum.

This exhibition titled, We The Peoples: Norman Rockwell’s United Nations also features a collection of the artist’s series of Peace Corps paintings, civil rights era illustrations, and reference photographs documenting his 1953 visit to the then newly-formed United Nations Headquarters.

According to Norton Moffatt, “In 1952 [Rockwell] was moved to create a signature image to represent the United Nations, the young organization that had established in 1945 in a signing ceremony in San Francisco its founding charter that began, ‘We the Peoples.’…To communicate this big idea, Rockwell chose to portray the founding 51 nations, through 51 figures reflective of diverse cultures, religions, races and ethnicities, to represent the aspirational goals of the young organization.” 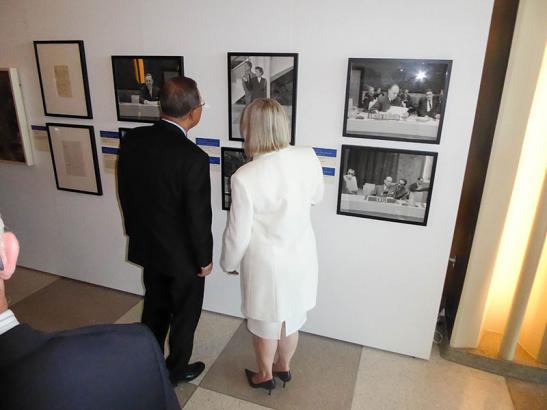 “I often walk by [the Golden Rule mosaic] and see people as diverse as the painting itself – standing in awe at its moving image of humanity and its transcendent message of compassion and community that is at the heart of all world religions.” UN Secretary-General Ban Ki-moon remarked at the exhibition’s opening.

“I think it is exceptional that this artist – so anchored in American society – was quite literally drawn to send the message:  we belong to the world,” the Secretary-General said.