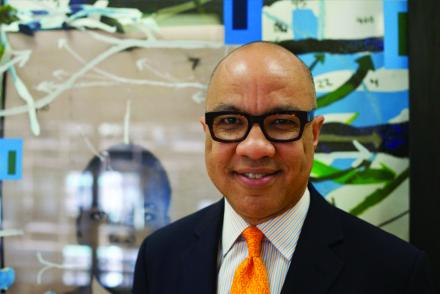 Open and Free: On Arts, Democracy, and Inequality

Ford Foundation President Darren Walker addressed the annual meeting of the Association of Art Museum Directors in Mexico City on January 26. The text of his speech, Open and Free: On Arts, Democracy, and Inequality, is available below and on the Ford Foundation's website.

Good afternoon, everyone. Thank you, Susan Taylor, for inviting me to speak. Thank you to the entire Board of Trustees of the AAMD—as well as our hosts here in Mexico City—for your hospitality and warmth. And I mean that literally. I’ll take 70 degrees here over 17 in New York any day.

In all seriousness, I am delighted to be with you. As you know, for more than a half century, the Ford Foundation has been an ardent supporter of museums and galleries, of creative expression and cultural innovation.

In fact, many of your institutions have been at it for just as long—if not longer—affirming the inseparability of the creative spirit from the human spirit, of the arts from our democracies. It’s wonderful to see so many friends from the Brooklyn Museum, the Studio Museum in Harlem, and many others who promote art and social justice through your education and outreach programs.

And, today, I’d like to reflect on exactly this: The place of the arts in my life, in our communities, and in our society—as well as the undeniable threat that inequality poses to the arts and our democracies as a whole.

For as long as I can remember, the arts have imbued energy and meaning into my life.

As a child growing up in Ames, a little town in Southeast Texas, I poured over the glossy pages of art magazines that my grandmother, a domestic, brought me from the homes of the wealthy families for whom she worked. Page after page, hour after hour, my mind visited worlds from which I otherwise would have been excluded. My horizons—my sense of the possible—expanded far beyond the hardscrabble east Texas landscape. In many ways, because of the arts, my economic situation never limited my expectations for myself.

As a student at the University of Texas at Austin, I first saw the Dance Theater of Harlem and my life was changed forever.

As a young professional in New York in the 1980s, I fell in love with the city’s museums and galleries, the likes of which I had never experienced before. I also fell in love with an art dealer, and was introduced to an entirely new world of collectors, curators, and critics.

I found a passion for the performing arts, and theater, and documentary film—becoming something of a culture vulture. My appetite for the arts was never sated.

Throughout my two decades in philanthropy, I have advocated for creative visionaries and sought new ways to support them. And when I joined the Ford Foundation from the Rockefeller Foundation, it was as the institution’s vice president of, among other things, creativity.

Suffice it to say, I am a fervent believer in the transformational, uplifting power of artistic expression. And I’m not alone. Earlier this month you announced that more than 61 million people across Canada, Mexico, and the United States visited your art museums last year.

This is tremendous news, a powerful testament to the place and purpose of your institutions. Indeed, art is something that we can all share in—a theater, if you will, where all people have equality of vision and equality of voice.

And yet, from my vantage point, I have noticed a troubling trend during the last few years. Not in attendance, but in attitude.

Increasingly, art institutions and artists themselves are internalizing a mentality of instrumentality, a particular kind of defensiveness.

They justify their contributions in economic terms, alone. They plead for resources and protest for relevance—defending their very existence with studies and statistics.

To be sure, the arts are an economic engine around the world. According to the United States National Endowment for the Arts and Bureau of Economic Analysis, in the U.S., alone, the arts contribute some $500 billion a year to GDP. That’s not nothing.

Yet, the global art community is—and should see itself as—much more than this. And while the arts’ diminished prominence and defensive posture cannot be denied, it can be understood—and beyond the classic excuses of budget cutting and belt tightening.

You might be wondering, why is this crisis happening? Where does this mentality of instrumentality come from?

To my mind, there are three main reasons.

For one thing, in this digital age, cultural innovators are straining to differentiate themselves—and struggling to cut through all the noise. The reason is that we are immersed in visual media—and although all art may be media, all media is certainly not art.

According to a 2010 study by our colleagues at the Kaiser Family Foundation, today’s young people pack 11 hours of media content into an average of seven and a half hours in front of their devices. That means they consume a staggering 1.6 hours of media every hour. By definition, much of this consumption is passive. Empty calories.

Too often, we look at our screens without engaging, in any meaningful way, with what is on them.

Art, on the other hand, demands an observer’s active participation. It moves. It provokes. It infuriates. It inspires. It elevates and equalizes. And our humanity is dependent upon it.

Second, as a result of big data’s ascent, we increasingly overemphasize information at the expense of intuition.

Don’t get me wrong; facts and figures—aggregations and algorithms—have their due place. We should be monitoring and measuring.

Nevertheless, we’ve allowed ourselves to buy into a false assumption: Our culture has bought into the idea that if something can’t be measured, then it somehow doesn’t matter. And, in turn, we’ve decreased our commitment to a lot of things that do.

No doubt, it is not easy to quantify the so-called “impact” of a musician, dancer, painter, or filmmaker—let alone a graffitist or video-game coder. We don’t have a stock exchange that puts a price on creativity.

But, in my eyes, this is no excuse for only funding those things that deliver immediately quantifiable returns. And this is true across philanthropy; another story for another day.

But—third—the most fundamental cause of today’s crisis in the arts is connected with a deeper transformation underway in our society: During these last few decades, we have raised market-oriented thinking above all other kinds and categories of human understanding.

Where once we treated different fields of knowledge and action with equal respect, we, today, subordinate everything under economics. In medicine, we talk about cost curves and insurance schemes—with relatively scant attention to the care in health care. In the U.S., especially, we champion the so-called STEM disciplines in our schools because, our politicians tell us, “that’s where the jobs are!” And this intellectual inequality—thinking economically rather than holistically—this perpetuates economic inequality, and social inequality, and political inequality.

Indeed, all of the inequalities that jeopardize our society’s wellness follow from this single manipulation—the idea that every element of our lives must be defined in relation to capital. No place is this distortion more palpable, problematic, and pernicious than in the arts.

One particular manifestation of this market-oriented thinking is the assumption that non-profits need to behave like businesses: That the walls of our museums should function like the financial markets which too often prioritize short-term gain over long-term good.

This kind of short-termism has infected so many dimensions of our lives. It has distorted the way our society makes decisions.

This, of course, is a global challenge. But take an example from our own recent experience: The Detroit Institute of Arts.

At the Ford Foundation, we watched as billionaires circled above a bankrupt city—the very image of inequality in our time—waiting to descend; waiting to strip down and sell a museum and its masterpieces. The dismantling and selling off the art in one of America’s great treasures is cause for outrage.

This may have made sense in the short term. But in the longer term, it was unacceptable.

These potential buyers simply were not invested in the Detroit of 2020, of 2030, of 2050—let alone in the people who live there.

What’s more, the fact this great treasure was at risk of being sold is perhaps the greatest metaphor we have for the threat of short-termism to the arts, and to the broader society.

To me, we should not need to defend the arts—nor to protect the arts.

The arts deserve celebration, not defense. They demand affirmation, not protection.

And this injustice goes by the name of inequality.

From Ecclesiastes to Plato’s Republic, Western thought has been organized on the principle that everything has its place. All aspects of human intellect and achievement are part of a delicate equilibrium. In a classical sense, this is the very definition of justice.

Today, our reliance on—and reverence for—short-term, market-based justifications reveals a profound imbalance in the way our society is organized. An inequality of the highest order.

As democracies, we owe ourselves better. We still can be a society that celebrates art—that, literally, treasures creative expression. And must continue working to translate this aspiration into action.

Sixteen months into my presidency at the Ford Foundation, I hear friends and colleagues asking, “Where does the foundation stand on arts and culture today?”

My answer is that, for us, they remain right where they belong—at the heart of everything we think about, invest in, and stand for.

This year, we’re exploring and experimenting. We’re working through, and with, arts organizations to determine how we most effectively can advance the arts—and, by extension, democracy and equality.

Because, simply put: Less art leads to more inequality. More inequality leads to less justice. And this is not something with which any of us should be comfortable.

For this reason, it’s up to us—up to funders and institutions, alike—to restore the arts to their place of importance, and restore balance to our imbalanced way of thinking.

Because, ultimately, art museums are not only underwritten by communities, but are the underpinning of them. They are the fulcrum on which society’s balance hinges—the forum where inequality is neutralized. And for your institutions to be essential in the community, you must engage with the community.

It’s not enough to say we’re open late on Thursdays, or that we’re free on Fridays. That’s not the openness or freedom the arts require—and, for that matter, inspire. Our communities deserve something greater.

As museum directors, you struggle with this—and so much more—every day. You have donors to court and doors to keep open; a budget to balance.

And I feel for you. You were trained for a world in which you were a curator, not a community organizer; an academic, not an advocate, or ambassador, or architect of democracy.

But when our arts are under siege—financially, like at the DIA, or more fundamentally through this pervasive market-based thinking I’ve been discussing—then you should be furious. You should be appalled. Most importantly, you should be moved to action.

But I am hopeful—not just optimistic, but radically optimistic. Together, we can—we will—reimagine what we do: for the good of the arts, and the good of our democracies in a time of inequality. And on every step of the journey, you’ll have a full partner in us.

Thank you very much. I hope you have a productive conference.

Image of Darren Walker courtesy of the Ford Foundation