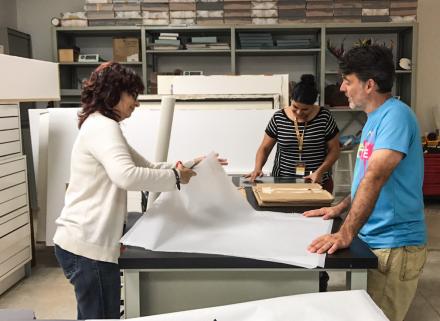 Puerto Rico’s Museums Bounce Back to Serve their Communities

Following the devastation of Hurricane Maria, at a time when most of Puerto Rico remains without electricity and many services are unavailable, two art museums are working quickly and tirelessly to serve the public, and the island’s cultural heritage.

Alejandra Peña Gutiérrez, director of Museo de Arte de Ponce, arrived at her museum the day after Hurricane Maria struck expecting the worst. But she and her staff found that the museum was in excellent shape, “like time had stopped inside the museum.”  Peña Gutiérrez and her team sprang into action, clearing debris from the grounds so the museum could re-open to the public. The museum was back open within a week after the storm offering free admission through October 30 as well as workshops, guided tours, and storytelling programs - at a time when most of the island remained without power. (Over 70% of Puerto Rico still does not have access to electricity.) “People have come in, saying at the entrance, ‘I lost my house,’” said Peña Gutiérrez. “They are really sad when they come here, but when they leave they have a smile on their face. And they say, ‘This was good for me. This is a great way to see things can be done and we can move forward.’” See more about Museo de Arte de Ponce's response to Hurricane Maria in the below video.

Meanwhile, San Juan’s Museo de Arte de Puerto Rico remains closed to the public – but open to cultural institutions whose collections need safekeeping while services are restored to the island. As an affiliate of the Smithsonian, MAPR was eligible to receive fast-tracked Smithsonian emergency funding to help the museum care for their collection as well as those of other vulnerable institutions in Puerto Rico. The funding supports the purchase diesel for generators to keep the museum climate-controlled, as well as training in art conservation for museum professionals. Currently, MAPR is storing collection objects from la Universidad de Puerto Rico, la Universidad del Sagrado Corazón, el Instituto de Cultura Puertorriqueña, el Museo de Arte de Caguas and el Palacio de Santa Catalina La Fortaleza, the official residence of the Governor of Puerto Rico.  Interim director Marta Mabel Perez says they anticipate receiving more objects from other collections as well.

MAPR staff are also volunteering in different relief efforts on the island, as seen in this Facebook post.

“Now, the main thing is to ensure the collections, those of our community of institutions as well as ours. These are treasures of Puerto Rico, unreplaceable and invaluable, that have to transcend our generation and remain for those who will come in the future," said Arturo García Solá, president of MAPR's Board of Trustees.

Above photo: Norma Vila (in the background), registrar of the University of the Sacred Heart, together with Museo de Arte de Puerto Rico's registrar assistant, Marnie Pérez and preparer Carlos Faure complete the process of entry of several of their works.

Puerto Rico’s museums on the mend, The Art Newspaper, October 4, 2017