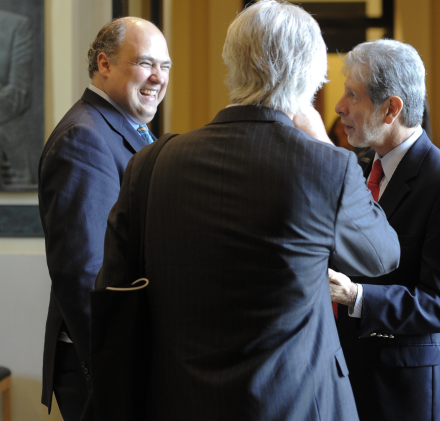 Mark Roglán, director of the Meadows Museum at Southern Methodist University in Dallas since 2006, passed away on October 5, 2021. Mark was a member of AAMD for fifteen years and served on the board from 2015-2019. AAMD shares our condolences with Mark's family, friends, and colleagues at the Meadows and beyond.

In October, we lost a giant of a professional.  Mark Roglán epitomized compassion and humility in our field, even as he rose to prominence as a trusted leader and innovator.

I remember one of my first encounters with Mark. I had driven to Dallas from Fort Worth to attend an opening at the Meadows Museum (SMU). We shared several patrons and two encouraged me to join them for this event. The occasion was an opening of Spanish art from the Prado. As Mark was introduced the reception hall burst into a standing ovation. I stood with the rest and marveled at the sincere affection the people gathered had for Mark. I knew that he was a man of consequence, even though he did not seem affected by the adulation. It was a matter of mutual respect.

As I got to know Mark the professional and the person, he always demonstrated kindness and attention to whatever matter we might be engaged. No subject was too small or unimportant and I found myself looking forward to unexpected encounters, especially at AAMD, where his leadership became as apparent as his adulation by his Dallas community. He was a consummate curator as well, growing the collection and developing exhibitions with the precision needed to make the Meadows the most significant repository of Spanish art in the United States. I would watch with anticipation the notices in  Arts Daily and the local newspapers for the latest acquisition at the Meadows -- a major portrait Ignacio Zuloaga, a painting by Goya, or a personal favorite of Mark’s, the final painting by Mariano Fortuny. In an effort to draw renewed focus on the painting, Mark asked to borrow a painting by William Merritt Chase from the Carter.  Both works had common palette and subject matter and underscored the internationalism of the Impressionist movement.  We spent two hours before an attentive audience discussing the significance of Fortuny. The details are not important, but what I admired was the passion Mark held for all that he did – generally without ego. This of course always and inevitably extended to his family for whom he always had time to nurture.

Eric Lee, director at the Kimbell Museum, shared this admiration: “I was always impressed with the outstanding acquisitions Mark made for the Meadows, including paintings by Goya and Dali. These acquisitions and potential acquisitions were usually examined and/or conserved in the Kimbell’s conservation studio, so I was able to get a sneak peek at them. Mark was excited to discuss these acquisitions, as well as the Meadows’s latest exhibitions and programs. He clearly left the Meadows a greater, more dynamic institution than the one he came to many years before. His love for the Meadows was palpable, as was his love for his family. Every time I saw Mark he would talk with pride about his four children.”

During the pandemic, even as his illness began to reveal itself, Mark played a part in our statewide effort to provide support and information amidst all the change and confusion. Every week, directors from across the state met via Zoom and created an intimacy that often alluded our best efforts in normal times. As I had come to know, Mark proved a calming and kind center in our discussions, sharing what his university had developed and always reassuring that the world would right itself again. It was his authenticity that I appreciated. My colleague at the Nasher Sculpture Center, Jeremy Strick, offered a perspective that truly sums up not only Mark as a professional, but the friendship that he showed all of us in the Metroplex and all of us in the field: “Over the past decade, I had the privilege to observe Mark as he quietly but deliberately transformed the Meadows. Indeed, it was remarkable to observe the great strides made by the Meadows under Mark’s leadership. Exceptional acquisitions followed exhibitions of significant ambition and scholarly substance, while the museum’s position in the community continued to grow apace with its international reputation. All the while, Mark was a generous and considerate colleague, thoughtful and supportive, eager to share insight and experience. I’ll miss him as a colleague and as a friend, and I’ll miss witnessing the further transformations at the Meadows he would have no doubt effected.”

Mark, you will be missed! But your impact and the traces you have left behind have made our journey in this field richer and more meaningful.  And that is forever.

Photo: from left to right, Mark Roglán; Julián Zugazagoitia, director of the Nelson-Atkins Museum of Art (with back to camera); and Hector Rivero Borrell, director of Museo Franz Mayer from 1993-2018, at a luncheon at the Meadows Museum during AAMD's Annual Meeting in Dallas and Fort Worth, June 2014. Image courtesy of Tamytha Cameron.