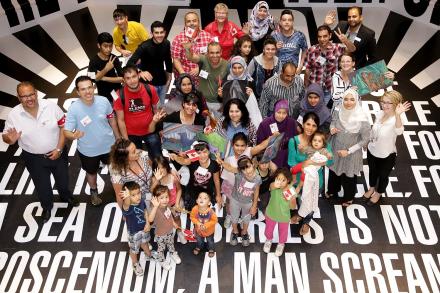 On July 25, Vancouver Art Gallery (VAG) hosted a welcome program for Syrian refugees newly arrived in Canada.  Almost 30 people of all ages came to the gallery for a tour of the exhibition I Had an Interesting French Artist to See Me This Summer, which explores how the British Columbia landscape and the art of the Pacific Northwest First Nations influenced Canadian artist Emily Carr and Austrian artist Wolfgang Paalen. The program is part of Ahlan (Arabic for welcome), a partnership between the Institute for Canadian Citizenship (ICC) and partners throughout Canada, which introduces Canadian newcomers to the art and culture of the country and provides free access to venues and attractions throughout the country. 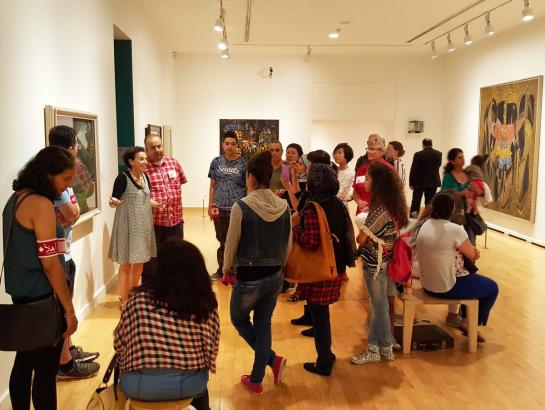 Ahlan/Welcome tour of I Had an Interesting French Artist to See Me This Summer at Vancouver Art Gallery. Photo by Debra Zhou

Several Arabic-speaking volunteers - some of whom are new to Canada themselves - facilitated the tour for the Syrian newcomers, who asked questions and took pictures throughout the tour. The VAG event is the sixth that has taken place across Canada (previous hosts include AAMD members Art Gallery of Ontario and Royal Ontario Museum) and there is significant demand to add more – even though it was at first unclear whether the tours would garner much interest. “We knew that a lot of these newcomers are just coming into the country and have a lot of important things that they need to do, so one of the things we weren’t sure about was the amount of response we would get,” Alykhan Haji, manager of partnerships at ICC, told Metro Vancouver.

Mohammad Salem Abde, a father of four originally from Aleppo attended Ahlan at VAG with his family (Metro Vancouver reported that his teen daughters snapped photos of the exhibition). Abde and his family have been in Vancouver less than 8 weeks and finally had the opportunity to explore the city’s culture after spending the prior weeks managing urgent matters like medical care and house repairs.

“I would like to know everything about Canada,” he told Metro Vancouver through an interpreter. “Whenever you go to a new country, it’s important to know about the history.”