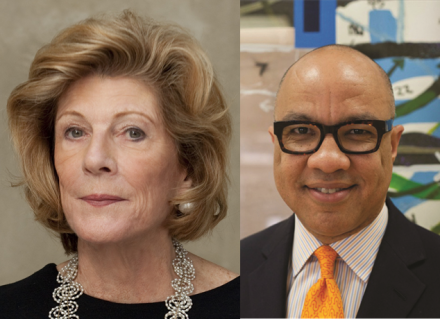 Diversity in the Arts

AAMD is thrilled to present a conversation on diversity in the arts between Ford Foundation President Darren Walker and Museum of Modern Art President Emerita and leading arts philanthropist Agnes Gund. Following his address to our membership in January 2015, AAMD leadership wanted to share Walker’s passion for diversity in the arts with museum boards of trustees and staff.  Walker invited his friend Ms. Gund to discuss this issue on camera – and hence, we have the following video.

AAMD is strongly committed to diversifying the art museum field, as demonstrated through our partnership with UNCF and our participation in the Mellon Foundation’s Art Museum Staff Demographic Survey. We hope this video will act as a starting point for museum directors and boards to discuss diversity in their institutions. Many thanks to Mr. Walker and Ms. Gund for being so generous with their time, and to the Ford Foundation team that produced this video. We look forward to continuing this dialogue and working with our member museums and beyond to create a more diverse art museum field.

For additional context, below the video you will find statistics about board and staff diversity in nonprofits, the art museum field, and beyond.

According to the Mellon Foundation’s Art Museum Staff Demographic Survey, which studied the gender and ethnic diversity of AAMD member museums, 28 percent of museum staffs are from minority backgrounds. the great majority of these workers are concentrated in security, facilities, finance and human resources jobs. Among museum curators, conservators, educators and leaders, only 4 percent are African American and 3 percent Hispanic.

More than 70 percent of the board members of Fortune 500 companies are white and male, according to a 2013 study by the Alliance for Board Diversity. This is a small change from the approximately 75 percent of Caucasian male board members that a 2010 version of the study revealed. The report also found that women and minorities are underrepresented in board leadership positions. For example, 93 percent of board chairs last year were Caucasian men, while 4 percent were minority men, roughly 3 percent were Caucasian women, and minority women made up less than 1 percent.

BoardSource reports that despite a widespread acknowledgement of the importance of board diversity, many nonprofit boards are struggling to achieve board composition that reflects their values in terms of diversity and inclusivity and boards remain majority:

Image of Darren Walker courtesy of the Ford Foundation

Diversity in the Arts: Production Credits